How To Get People To Care And Ask About Clinical Trials?

How To Get People To Care And Ask About Clinical Trials?

It’s been a few weeks now since International Clinical Trials Day, May 20. 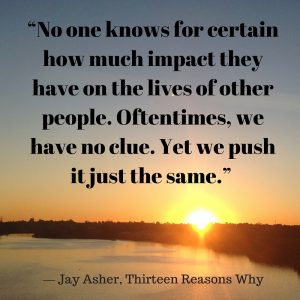 We’ve been a little quiet on this blog since then for a couple of reasons.  The first is trying to recover from May and all the energy put into various events, such as this campaign, to raise awareness of, and celebrate the value of clinical trials and those that contribute to them.  The second is I’ve been sitting back pondering what impact events like this campaign and Clinical Trials Day have in improving community awareness of trials, to the point that they actively seek out trials.

In my home country of Australia, I have to say I was disappointed that Clinical Trials Day seemed to generate very little media attention, despite the government’s attempts to publicise events occurring before and after the day (see here). The only story that got mentioned by a few outlets was an election campaign announcement by one political party relating to some funding for improving clinical trials infrastucture. If media attention can be used as a surrogate marker for the interests of the general population, then we have a real challenge with clinical trials. Either that, or as an industry, those involved in clinical trials are really poor at engaging the media, and hence public, about clinical trials.

I think what those of us who try to raise community awareness about clinical trials are hoping for as a result, is that people will be more likely to talk to their doctor, or use their own resources, to find trials and/or consider participating in them. This would help solve the global problem we have with poor recruitment to trials, which slows the speed of research and inhibits our ability to deliver the safest, most effective treatments as quickly as possible to the community.

Since its launch in 2004, a growing number of organisations globally have run events in and around International Clinical Trials Day to promote and celebrate clinical trials. You would hope therefore that we were making some impact on the global consciousness about clinical trials. 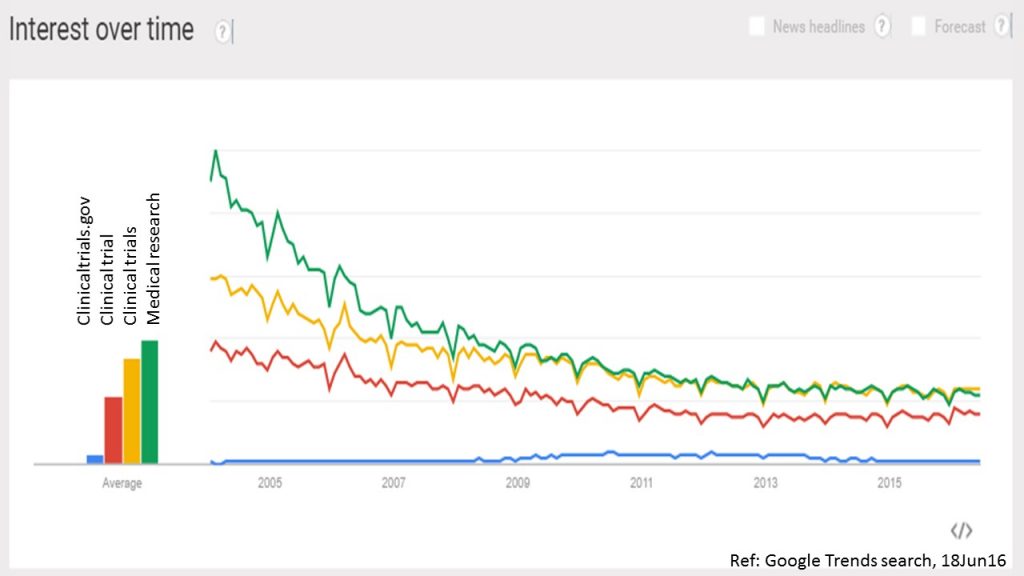 I thought I would do a quick search on Google Trends to see whether people have been searching Google using terms like clinical trial, clinical trials, medical research and clinicaltrials.gov more often over time.  The graph to the right is what I found….

Now, I don’t really know how Google collate this data, or what underlying assumptions there are in how it is put together. But on a superficial level, this graph doesn’t look promising given the amount of energy that lots of people globally are putting into trying to raise awareness of clinical trials. It’s not to say this effort isn’t important, but it doesn’t seem to be creating action, if you suppose that increased awareness might lead people to google trying to find out more about clinical trials.

Could it be that people have become more informed and now just go directly to health, disease, company or trial register websites directly for clinical trial information, rather than using Google to search for it?  I’d like to think so, but I suspect this might be a little optimistic.

So I continue to sit and ponder the question – what is the best way to engage the public about clinical trials, and make them care enough to actively seek them out? In doing so, I continue to seek out others with this common interest to look for ways to make a difference. A couple of weeks ago, the universe brought to my attention a great TEDx Phoenixville talk by Joseph Kim (@JoPeKim). Joe has a mission to inspire everyone to care about clinical research (which you can read more about on the LillyPad Blog).

I have to say this talk is the best I have seen in a long time that explains clinical trials in a very approachable way, and makes the case for why the community need to care about them. It is 15 minutes long, but I believe is a worthwhile investment of your time, and I would encourage you to share it with as many people as possible. It’s a great message, well delivered. The video even made my husband think about asking his doctor about trials, despite any previous interest in doing so, even though he has listened to me bang on about the subject for years. So it must do something right!

We need to find a way to move the community to care enough about clinical trials. After all, having the best treatments available to us when we need them is a matter of urgency for all of us. Awareness campaigns are a very useful tool, but we just need to make sure they are resulting in the action that we need – more people asking about and participating in clinical trials.

What’s your solution for helping people to care more?