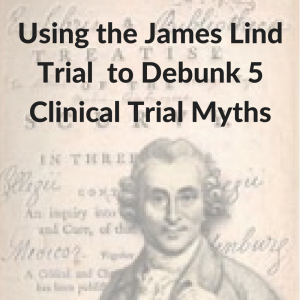 May 20 is International Clinical Trials Day. It celebrates the first recognised controlled clinical trial of modern times, where James Lind investigated potential cures of scurvy, and discovered the role of citrus fruits in curing it.

It’s a useful trial to celebrate, not just because it was the first recognised controlled trial, but because it can be used to help debunk some of the common myths that exist about clinical trials.

Myth 1: Clinical trials are only for people that are dying

James Lind’s trial sought to look for different treatments for scurvy. Scurvy was certainly a debilitating condition at the time, but death was not a certainty.

And so it is true that clinical trials can be used to address health issues that vary both in severity, and the interventions needed to treat them.  From healing wounds and headaches, through to lengthening and improving the lives of those with life-threatening or inherited conditions, clinical trials help to gather the evidence about what works, and the safety of that treatment.

Myth 2: There is always a placebo

The other note to make about placebo’s (or even comparative treatments) is that we all assume that the ‘newest/latest’ intervention will be the best treatment. While we may hope that is true (why else would you run the trial?), there is no guarantee. In a lot of cases the ‘test’ arm is not actually proven to be a better treatment. So you shouldn’t assume you will definitely be worse off if you are assigned to the placebo (or standard of care) arm.

While the clinical trials you hear about on the news are often those that involving some amazing new drug or device, many trials are actually just looking around at what is already available and working out how they could be used differently (for example different doses, dosing schedules, different health conditions, etc).  Trials can involve testing physical or psychological interventions, rather than a drug or device.

The James Lind trial is a perfect example of looking outside the box at what was already widely available, not necessarily a medicine and not necessarily new, to see what might be able to treat scurvy.  And as it happened, citrus fruits came out on top as the only treatment that could help sailors recover, not a drug.

Everyone has a different risk profile, and that profile will change depending on the circumstances of the moment. For example, in our daily lives, we would try to avoid being exposed to radiation because we know that probably isn’t a good thing.  However, if we were to get some form of cancer for which radiation therapy was the standard of care, then we would likely downgrade the risk in favour of the potential benefit that therapy might provide.

So I will pre-empt the following by acknowledging that every person will just the risk of clinical trials differently at different times in their lives and that is 100% OK.  An individual needs to decide what is right for them by discussing all options with their doctors and study teams. It is OK to say NO to a clinical trial, and your doctor will not think less of you for it.

Having worked as a clinical trial professional, I understand the ethical, regulatory and safety framework that underpins the conduct of clinical trials. Clinical trial participants can actually have better outcomes than they might have otherwise had, independent of their treatment arm, just because of the greater attention to their safety and wellbeing, and their own greater focus on their condition.  There is a risk, absolutely, with being involved in testing new medicines that have never/rarely been used in people before. And we have to be grateful to those willing to take that risk, as many of us might not otherwise be here except for those people.

Clinical trials can become very dangerous when there is inappropriate oversight and approval.

If ever offered a trial to participate in, I would recommend making sure you are aware of your rights, that you have sufficient time and information to make an informed decision (a decision which can be reversed at any time), that the trial has appropriate oversight, ethical approval and a study team that seems to care to minimise the risk of being involved in a dangerous enterprise.

Myth 5: Your doctor will tell you about any clinical trial that might be suitable for you.

I am sure at the time of Lind’s trial there were many naval ships, carrying many sailors that were likely getting scurvy.  But it was only the sailors on Lind’s ship whom had access to this trial. He probably wasn’t writing to all the other ships to let them know what he was doing or asking them to be involved, and other ships certainly weren’t sending their sick sailors to his ship to be part of the trial.

Though our mechanisms for information-sharing and communication have improved slightly since 1747, it is still the case that the people with access to trials are most likely those whose doctors are somehow connected to those running the trial. Doctors simply can’t be across every single piece of research that is happening when there is so much to know about the treatments already available to them. Clinical trials are just not top of mind for most doctors.

If you appreciate that clinical trials are an important mechanism for finding and evaluating the best treatments, then next time you are diagnosed with something, whether it be as simple as acne or a migraine, through to something more serious, ask your doctor if they are aware of any clinical trials that might be an option. If they don’t know, then you’ll need to go looking yourself.  A great place to start is on the government website which enables you to search for, and be notified of, trials for in conditions you are interested in.

There are many other myths associated with clinical trials. To be sure you aren’t missing out on the opportunity to help yourself and others, then it pays to get truly informed about what clinical trials are all about. To learn more, we highly recommend starting with the following resources if you are in Australia (or check out the links page if located elsewhere):

Sorry, the comment form is closed at this time.